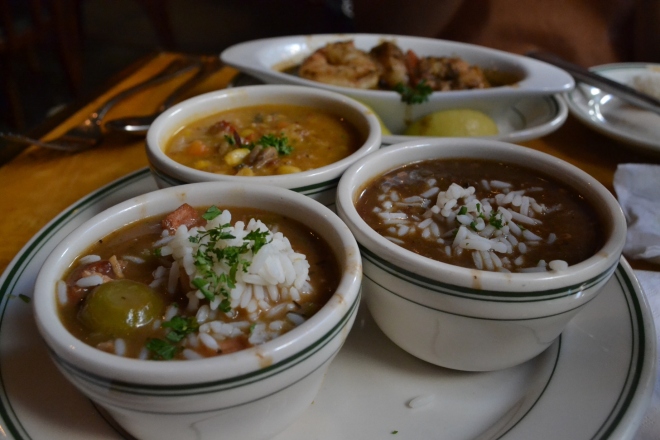 To be honest, the distinction between Cajun and Creole is still a bit confusing to me after some research and a trip to New Orleans. One thing I know for sure: both are very good! I wish I had a much bigger stomach and we could visit more restaurants and diners in NOLA. We did go to some of the most recommended ones though ── Acme Oyster House and Gumbo Shop. 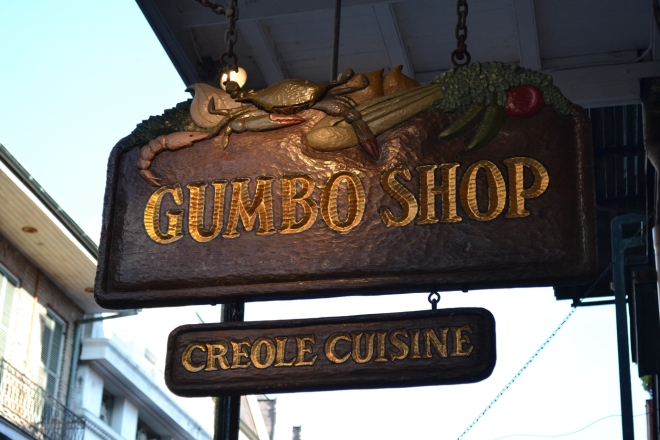 Although modern day Cajun and Creole food seem to be mixed together sometimes, the traditional distinction is actually fascinating once you make the connections between cooking and history. The differences about who uses tomatoes and who uses okra may seem complicated. All the information clicks once you know the history of the two ethic groups.

The name”Cajun” came from les Cadiens or les Acadiens in French. They are French descendants who centuries ago moved to Arcadia and then Louisiana. In early 17th century, France colonized a piece of land in North America and called it Arcadia. That’s the Maritimes of Canada today. (New Brunswick, Prince Edward Island, and Nova Scotia.) These people are called the Arcadians. The English, Scottish and Dutch all wanted this land. Finally the Brits took over in 1710 (Conquest of Acadia.) Then things went south between French and British before the Seven Years War. So during this period, many Arcadians relocated to and settled down in Louisiana. They lived in swamps, bayou and prairie and called this land Arcadiana. They cooked with whatever they could grow, hunt or catch in the bayou or the Gulf of Mexico. 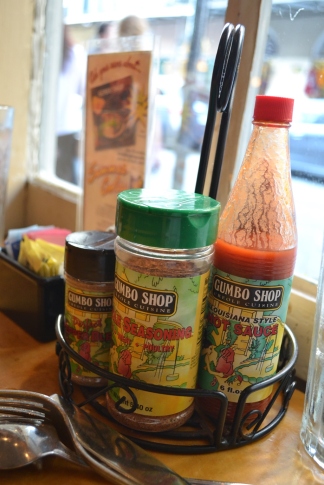 Creole, or to be more specific, Louisiana Creole as an ethnic group, originally meant descendants of colonial settlers in Louisiana, mainly French and Spanish. Later on the concept was broadened to refer to descendants of Africans, Irish, Germans, Italians and more, or mix kids of these ethnic groups and Creole. There are also mix kids of Creole and Native Americans. So in early stage, Creole were rich colonists who hired chefs from Paris, Madrid or other European cities and cooks who were slaves that they trafficked from Africa. Immigrants made Creole food exotic and abundant.

Cajun and Creole are two different types of cuisine. You’d find jambalaya and gumbo in both. The difference is in ingredients and style. Here’s my understanding about Cajun and Creole food, and I may be wrong. Both Cajun and Creole use what’s called the holy trinity: onion, celery and bell pepper. However, Creole is city cooking (because it originated in kitchens of rich colonists); Cajun is country food (originally made with whatever people could find and hunt in bayou or the Gulf of Mexico.) Creole uses tomatoes; Cajun does not. (Tomatoes came from Mexico. Spanish colonial settlers spread it around.) Creole puts okra in gumbo; Cajun doesn’t really use okra. (Africans brought okra to North America.) Creole roux is made with butter and flour (like the French style); Cajun roux is made with oil and flour. (They didn’t have diary in many swampy areas of the Arcadiana.) Cajun has French influence; Creole is influenced by more ── including French, Spanish, African, German, Caribbean, Italian, Native American etc. ── and uses more ingredients. Cajun tends to be more spicy (cayenne pepper!); Creole tends to be mild.

After reading a few articles and seeing contradictory points, I began to understand why people use Cajun and Creole interchangeably to refer to Louisiana food nowadays. Nevertheless, if you understand the history of these two ethnic group, it is not hard to wrap your head around the distinction. (Chef Jay Ducote wrote a short and east to understand article about Cajun and Creole.) 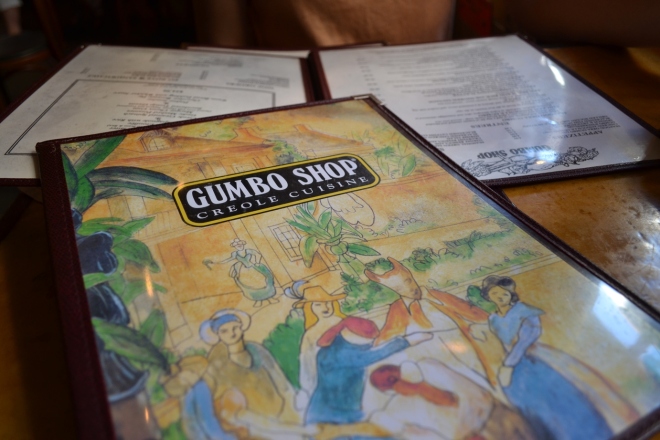 According to my very detailed travel plan, our first meal in New Orleans was going to be a dinner at Acme Oyster House. We checked in at the hotel, walked over to French Quarter, found Acme Oyster House at about 7:30 p.m., and we were stunned. There was a line of easily 50 to 60 people. We learned our lesson. The next day, we made it to Gumbo Shop for dinner at 5:30 p.m. The tables and space were tiny. Avoiding peak dining hours was a good call. 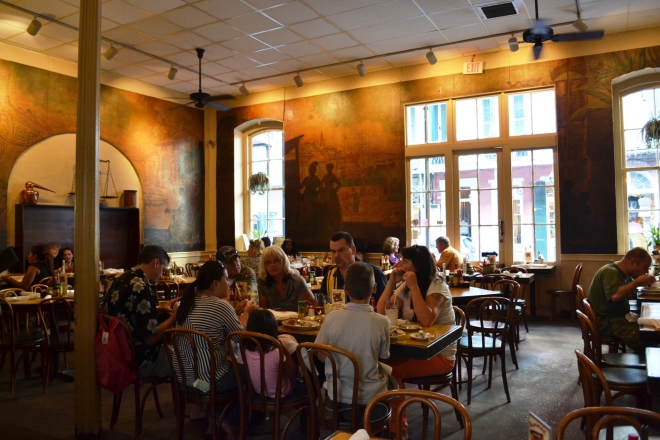 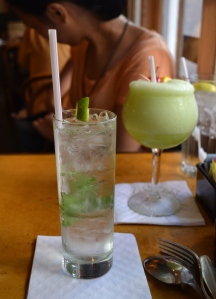 We tried two mix drinks, honeydew daiquiri and passion fruit mojito. The mojito was very tasty. For dinner we ordered an appetizer special of Louisiana style barbecue shrimps, a special soup trio, and a side of jambalaya. Without drinks and pre-tax, it was $27.97. The entire meal without tip was $48.24.

A loaf of bread came with the meal. It was incredible. Crisp on the outside and soft on the inside. Even though I knew that was a bad idea, I could not stop eating the bread before our dinner was served. That was my first time to try Louisiana barbecue shrimps. Although it’s called BBQ, it’s really butter, black pepper and spices. The shrimps were gigantic and fresh. Dipping the bread in that BBQ shrimp sauce, while sizzling and hot, was heavenly. I could eat just their bread and BBQ shrimps as a meal. It seems like their French bread came from Leidenheimer’s ── a famous bakery in NOLA. 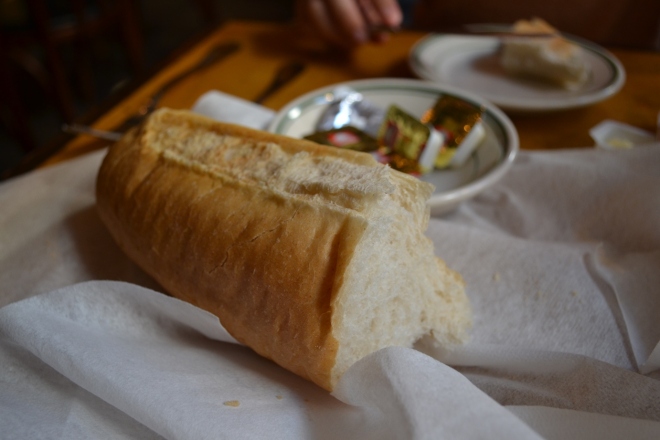 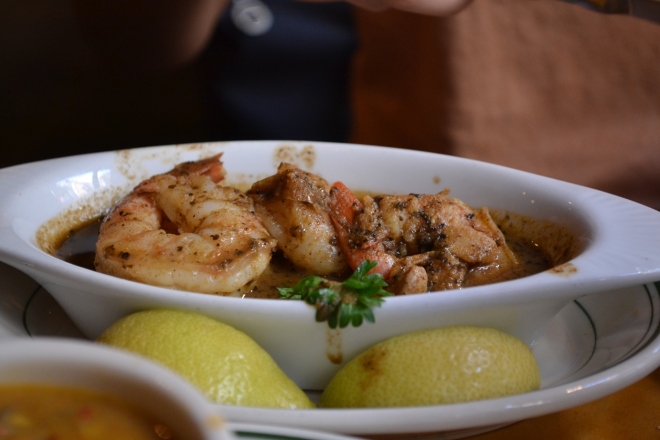 Gumbo Shop sells Creole cuisine. They did went very heavy on shrimps in their gumbo compared to a Cajun place we went. The special soup trio comprised of three cups of soup: seafood gumbo, chicken Andouille gumbo, and corn and crawfish chowder. Chicken Andouille gumbo was the best! The best gumbo I had during our stay in New Orleans. As to seafood gumbo, they went really heavy on tiny shrimps and I did not like that overly fishy flavor. We did not care for the corn and crawfish chowder. 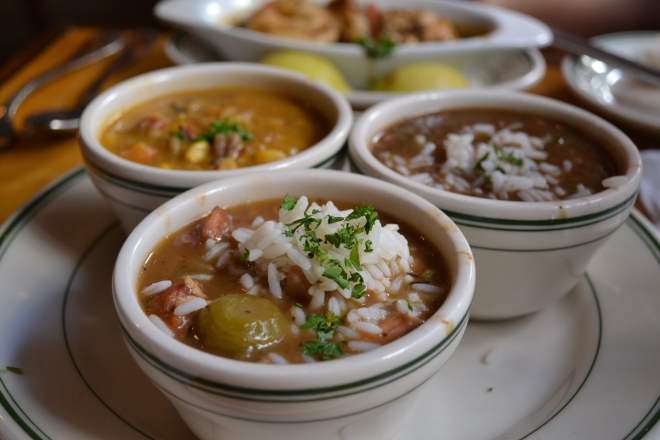 My sister liked their jambalaya over what we got in a different restaurant. I liked that other heavily Cajun seasoned jambalaya better. The jambalaya here fits with the Creole principles that I learned. They use a lot of tomatoes. But anyway, this is the type of jambalaya I like. Simple. Served in a bowl or on a plain plate. Not the type of pretty plating with plenty of seafood on top, almost paella looking jambalaya that I’d find in many fancy “NOLA” restaurants outside of New Orleans. This home-cooking style of food that reflected its cultural origin and adaptation to a new environment.

I definitely recommend gumbo shop. Chicken Andouille gumbo and Louisiana barbecue shrimps were the best! I wish we could try their etouffee. 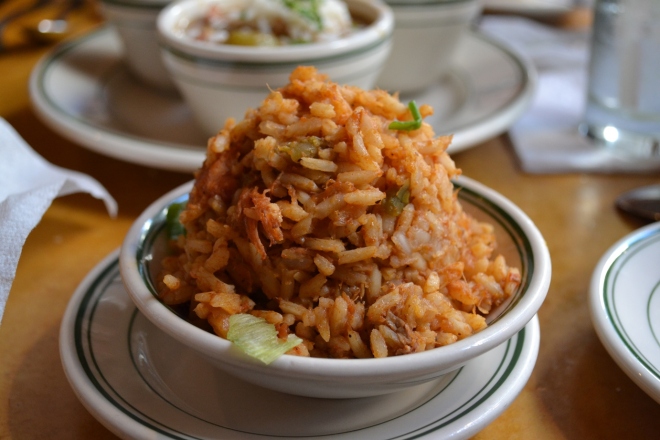 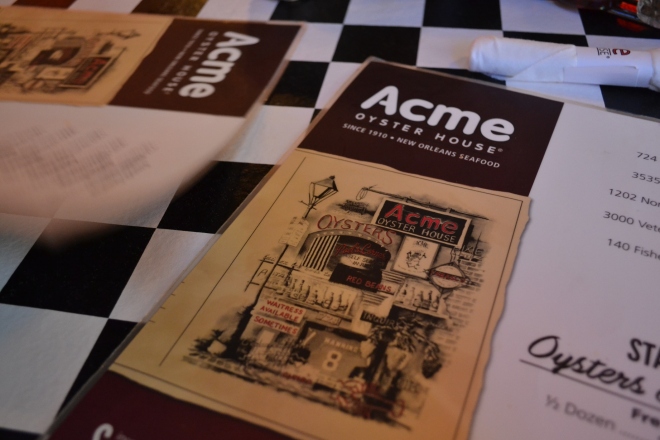 I had never eaten raw oysters until I was sitting in front of a humongous fresh seafood platter in a magnificent former opera house in Southern France. Brasserie FLO in Nice. Since then, I’ve been a sucker for raw oysters. 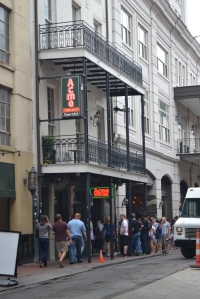 Acme is probably the most famous place for oysters in New Orleans for tourists. I had oysters here and at another restaurant. Acme was way better. Their raw oysters were so fresh and sweet with a hint of salty sea water.

If you are traveling in New Orleans and you want to try Acme, be early! The first night we made it to Acme at about 7:30 p.m., a ridiculously long line at its door forced us to give up. On the last day, we got here at 11:30 a.m. while the restaurant opened at 11. There was still a line! It was not bad though. The wait was about 20 minutes. We had eaten breakfast at Croissant d’Or and a shrimp and oyster po-boy from Johnny’s at 11. Coming to Acme was purely for their fresh, famous, hand-shucked oysters. For some reason ── maybe it was because walking under the sun all day  ── my stomach was grumpy most of the time when we were in New Orleans. I decided I should not risk eating one dozen of raw oysters before I hop on a plane and only ordered half a dozen. 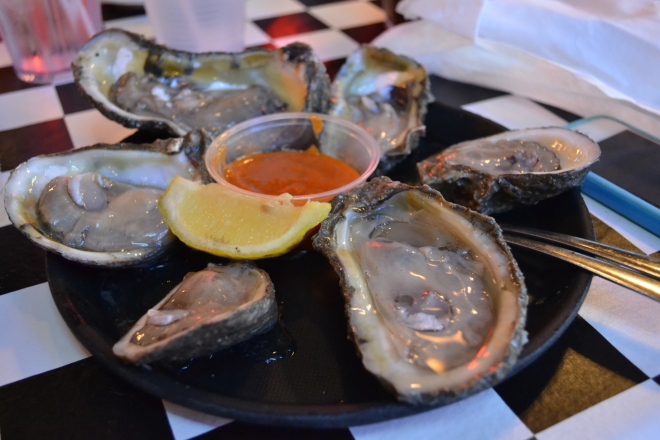 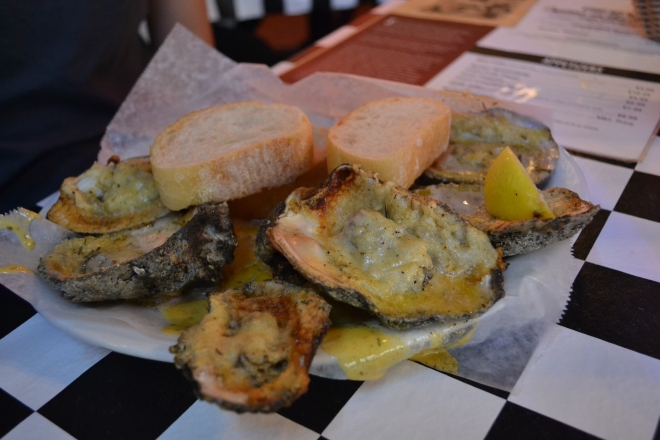 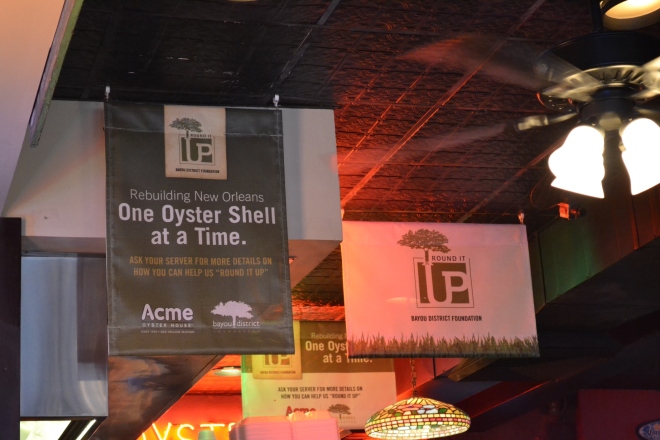 Every year Acme shucks and tosses millions of oysters. This NOLA seafood icon is doing some charity work. Acme participates in the Oyster Shell Recycling and Reef Restoration Program of the Coalition to Restore Coastal Louisiana. The program started in June 2013. Currently, the restaurant is also a partner of Bayou District Foundation in its “Round It Up” campaign. Customers can round up their bills and all proceeds go to the Bayou District Foundation. Acme will match up to $50,000.

After we checked in the hotel and got ready, the lobby staff directed us to this Oceana Grill. We planned to eat at Acme and thought this is probably one of those…we get 10% commission if we send people there and my uncle runs the restaurant, type of deal. However, seeing the long line at Acme, we did not want to wait. I took out my phone, looked up reviews of this Oceana Grill, and decided we would give it a try. 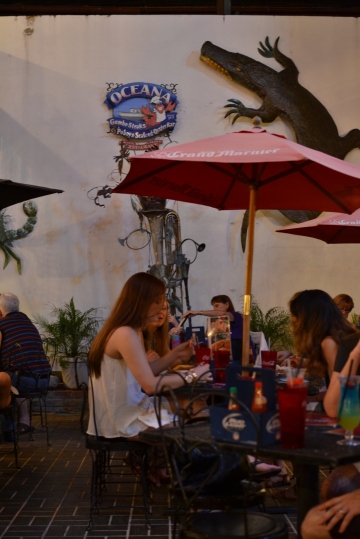 There was a short line at the door. A couple that was in line in front of us said some police officer recommended this place. That made us feel better about our dinner choice. The food turned out to be good in general. (Super salty though. And their Hurricane tasted bad.) It was a decent plan B if you were in the French Quarter at prime dinner time and did not feel like waiting too long.

There is a patio in the backyard. In late September in New Orleans, it was very nice to sit outside for dinner. We ordered half a dozen of raw oysters ($7), a cup of seafood gumbo ($4.75), and “Taste of New Orleans” ($16) to share. Oysters were fine but not as good as Acme’s. “Taste of New Orleans” is a plate of jambalaya, crawfish etouffee, smoked sausage, red beans, and rice. Both the gumbo and etouffee were pretty good. 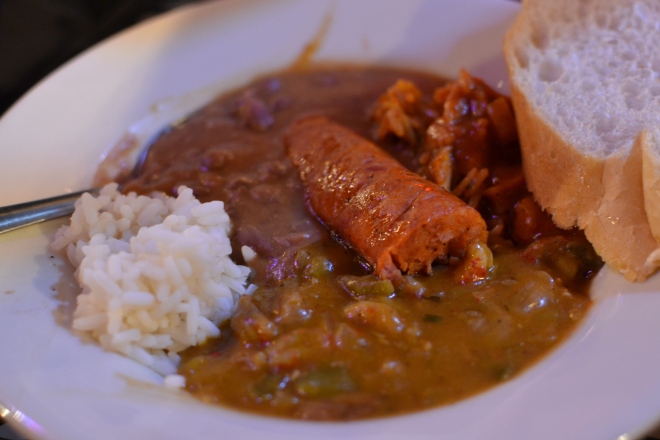 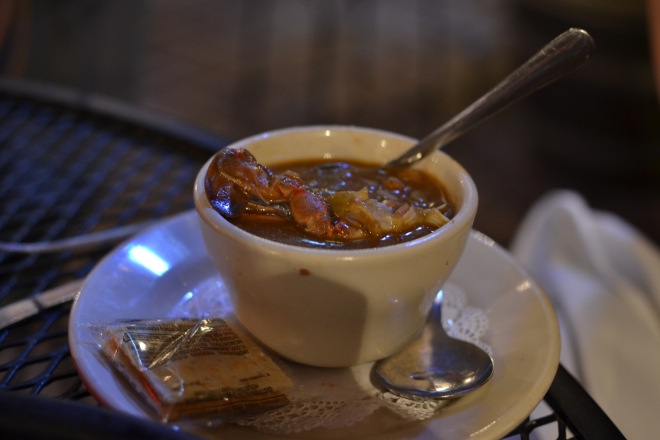 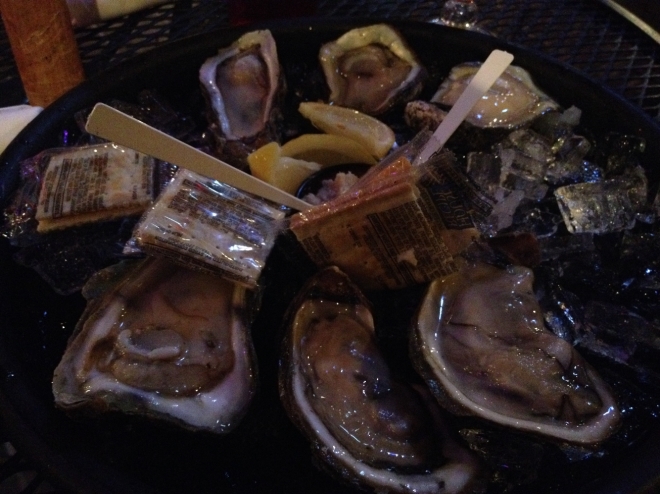