A friend of mine stayed for two months in Kingston, Jamaica’s capital city. I asked him for recommendations for my trip. Jerk chicken and Negril were the two must’s that he suggested. Negril is about 40 minutes in driving distance from our hotel, Grand Palladium Jamaica. It is a beach resort town known for its Seven Mile Beach and night life. Ian Fleming wrote a number of his novels here, and some of the parts in James Bond books and movies took place in Negril.

The light blue pin is Negril and the yellow house is Grand Palladium Jamaica.

Our trip was booked through Apple Vacations so we booked our day drip to Negril through them as well. This “Negril Sunset” day trip takes you to the Seven Mile Beach in Negril, some shopping centers and then Rick’s Cafe to watch sunset. Our tour bus picked us up at the hotel at about 11 a.m. and was scheduled to drop us off at about 7 p.m. This outing cost $27.5 per person. Later on we talked to people who booked a cab to go to Negril. It seemed that if you had a group of four or more, taxi was probably the way to go. If it was for only two people, booking a trip through a travel agent, though not ideal, would be cheaper. 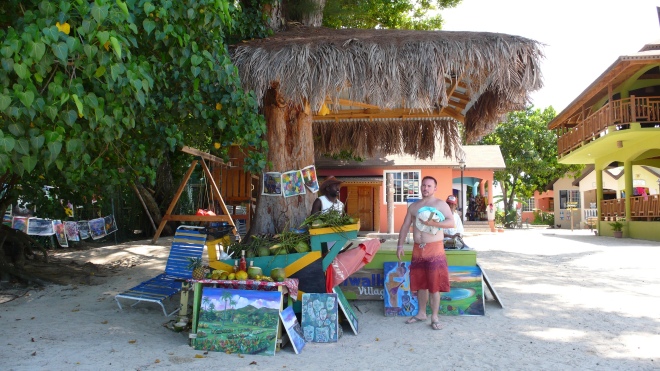 Azure and turquoise water, white sand, and palm trees. This allegedly seven mile stretch (some say it’s actually four miles) of white sand has been voted among the top beaches around the world. Huts and bungalows along the beach made the scene that much more relaxing and exotic. The tour bus dropped us off at a small B&B inside a compound of souvenir shops, one restaurants, a shower and changing facilities. We had three hours at the beach.

On the second day when we were spending one entire afternoon at the main pool of the Grand Palladium, Aaron ordered a rum and coke at the poolside bar. A bartender went on and on and on pouring rum, and then added a splash of coke. That was a solid triple. Looking at the non-stop stream of rum, Aaron commented on how strong this rum and coke was going to be. The bartender replied with a big smile, “Yah mon! This is Jamaica. Go big or go home!”

Go big or go home. That seems be to the philosophy that things in Jamaica follow. In Negril, we walked around in the ocean, in its warm and crystal clear water. I saw a sea urchin that was just as big as my face and two orange starfish that were even bigger! One of them was lying in the shade under that gigantic yellow trampoline. Those ginormous sea urchins moved fast! We left for lunch for less than an hour. By the time I came back to this area of water, I could not find the sea urchin anywhere nearby.

Locals catch conchs near the coast. They slam those conchs hard on the ground and force conchs out in order to sell the shells.

When we took out cash for the day from the save in the morning, naively I said we should just get something cheap and simple for lunch since we had spent so much on the tour itself. So wrong. A restaurant at the small resort where we were dropped off was our one and only option for lunch. Lunch was about $14. I ordered a jerk pork. Aaron got a quesadilla. Food was okay and certainly was not worth this tourist robbery price. Their quesadilla came with shredded carrots in it. Two meals, a water and a Pepsi cost $40. 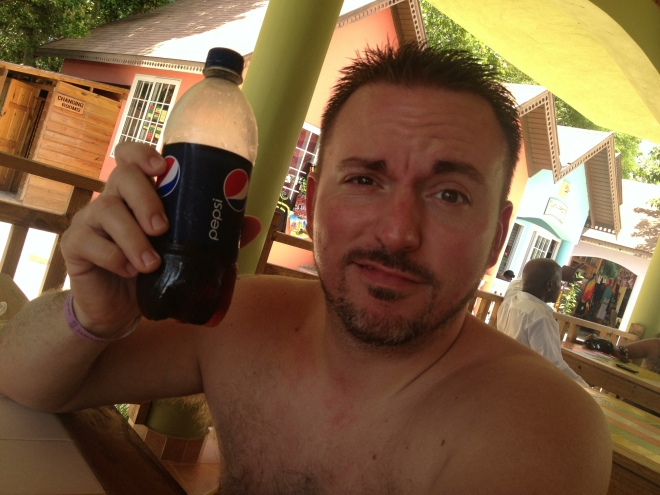 Check out My Pharmacy!

After lunch, we decided to take a walk along the beach. This part of the Negril beach was lined up with one resort or family-run hotel after another. Pass the hotel area, it was finally just beach and occasionally, some nudity.

Locals were very skilled at high pressure selling. One guy stopped us and tried to sell us a pack of homemade ginger infused coconut drops. Coconut drops are made of diced fresh or dried coconut, ginger, and brown sugar. Very gingery and sweet. Hardened sugar holds everything together. It is a very common dessert in Jamaica.

Those homemade coconut drops were way too gingery for Aaron. I ate most of them but could not finish it. The combination of ginger and brown sugar was the exact opposite of what I needed under the 1 p.m. sun. I felt like these candies were something that could cure a cold. I needed coconut water or aloe drink to fight that heat and dehydration.

A cop walked toward us after we bought a pack of coconut drops to check how much the vendor charged us. It was a dollar or two. From the cop’s expression, that was a reasonable price. 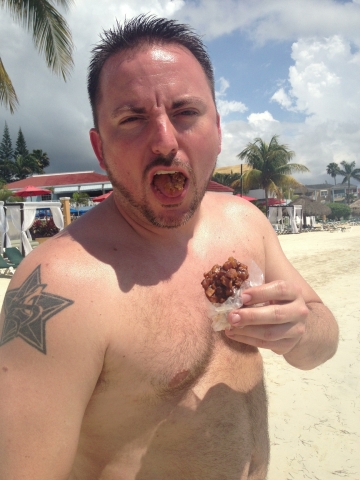 As we were strolling in shallow water, some hawkers tried to draw our attention on some handcrafted necklaces and conch shells. What caught Aaron’s attention were a couple of Red Stripe bottles cut and reshaped into wine glasses. He had to walk over and check them out.

Aaron is horrible at saying no to people. Here we ran into a situation where we needed that cop and he was not around.

This old man showed us conch shells that you can blow into, while Aaron looked at those Red Stripe glasses. Aaron told him the conch shells might be something that he could considered and that we would come back later. Right when I looked down as this old man started putting one coral reef bracelet after another on my wrist, Aaron followed some young guy and walked away. They disappeared in this jungle nearby. I was still on the beach so did not fear for my safety, but I became uneasy when trees completely blocked Aaron from my sight.

“What are they doing over there?” I asked the old man. “Oh, he’s just showing your boyfriend things he made.” Slowly and politely, I took off those bracelets off my wrist, afraid to break any, thanked the old man, and decided to walk over to Aaron and get out from this uncomfortable situation. Just as I got closer, Aaron and this young man slowly walked out, being in the middle on a conversation. As soon as this guy saw me, he said, “I was showing him what I use to catch lobsters. Look!” From Aaron’s expression, I knew the lobster cage was not what it was about. He came up with excuses and we walked away. 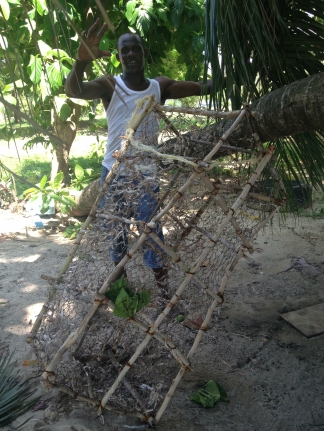 “Can we take a different route back? Can you walk through the jungle barefoot?” Aaron was serious about finding an alternative way back as he separated our money by pulling some cash out of his wallet and kept some in his other pocket.

It was the ocean on our right and a road on our left. Tall grass, trees and a wire fence separated us from the road. There was no other way back besides turning around. I thought, what was the big deal? Aaron did not tell me the entire story until later that day.

Apparently those vendors used a common technique of separating us by trapping me with putting bracelets on my wrists and pulling Aaron away. The young lobster cage guy grabbed Aaron’s arm hard with his fingers pressing into Aaron’s forearm. Just as Aaron shook this grab away, a bigger guy pushed Aaron in his back, coercing him into walking toward the direction of the jungle. At this moment, Aaron saw a machete lying on the ground nearby. I had no idea that he was threatened by a harsh grab in his arm and a machete.

A million things went through his mind: They have a machete. We’re gonna be robbed. Worst case scenario, they take the $30 in my wallet. Sabrina is still in the open space on the beach. I can see her. She should be all right. If we run, how fast can I rush to her and drag her to run? How am I gonna get us out of the situation?

This whole time I was happy in my la la land, having zero clue about this machete and weed episode.

“Welcome to my pharmacy!” the lobster guy said as he unfolded a wrap on the ground, filled with weed, Thai sticks and drugs.

“You should try this. You and your girlfriend can have some fun tonight. How about this? A hundred dollars. No? [Breaking some Thai stinks into half.] Fifty!”

Aaron stopped him from breaking more and told him that we really did not smoke weed at all, trying to walk away. Then I showed up.

We took the same way back. Aaron set aside a twenty. He spent $15 to buy a conch shell from the stand and gave the lobster guy a five, asking him to leave us alone. This guy insisted that he could not take the money, reached for his pocket, and gave Aaron three hand rolled cigarettes (that stunk so bad.)

Our street robbery stories did not end there.

On the day of our friends’ wedding, we rent a double kayak at the Sunset Cove of our hotel in the morning. Kayaking on this tranquil blue water was very relaxing. It was so nice to not have to worry about splashing water on me, unlike kayaking near the Key Bridge on the Potomac in DC. I always tried to be as careful as possible to not splash any dirty river water on myself. Quite the contrary here, it actually felt good to splash some clean and cool sea water on the kayak and me under the sun. It would have taken me forever to get so far from the beach. With Aaron rolling the kayak, I could go wherever I wanted in a second! That was awesome!

I was in my own little world again. Aaron was steering: let’s go over there; let’s turn this way. Then I realized it was all because there was this guy following us around in a tiny wooden boat with a motor. We had gotten rid of him, and next thing we knew he was 10 feet away following us again.

I saw this tiny private beach with Little Mermaid style reef. I wanted to go take silly pictures, posing in the “part of the world” style. We pulled over. I took off my live jacket, threw it on the beach along with my oar, and started taking pictures with Aaron’s phone. All of a sudden Aaron kept his voice down and said really fast, “Put on your life jacket. Grab your oar. Get in the boat RIGHT NOW!”

It was the motor boat creeping in. We had no idea whether he just wanted to sell us some weed or….what!?

I grabbed everything and jumped in our kayak. Aaron was ready to sprint. This guy said…”Yah mon! You want to go fishing? I can take you out miles and miles away in the ocean!”……to kill us and throw us into the sea!? He had a tiny wooden boat which I would not trust out in the sea. Besides, why would we want to go way out into the sea alone with a stranger!?

Aaron told him we were in a hurry to attend a wedding and asked whether he would be there the next day. “I’m here everyday. Look for Michael. Yah mon!”

See that little boat in the back? That was Michael. Yah mon!

One thought on “Jamaica: Seven Mile Beach at Negril 牙買加七哩沙灘”