It seems that starting late 2012 or early 2013, Jamaica does not recognize Taiwanese passports anymore. However, websites of their consulates in the U.S. were not clear about this new regulation.

We were going to travel to Jamaica from the United States in late April. I sent in my visa application to the Consulate of Jamaica in New York City in mid or late January. The package included my passport, photos, money orders of a visa fee and a FedEx return fee, and the Visa Application Form J.

A few days later, I got a voice mail from the Vice Consul, telling me to give her a call back. Then I was told that I should not have used the visa application form. Instead, I needed the Affidavit in Lieu of Passport form, which was nowhere to be found on their website.

My friend found detailed regulations about citizens of Taiwan applying for a tourist visa of Jamaica from the U.S. on Visa Headquarters. Their information was way more useful than what was provided on Jamaican consulates’ websites. However, the Affidavit in Lieu of Passport form downloaded from Visa HQ was different from the one that the Vice Consul emailed me. In print, this form said: “I have lost my nationality of origin owing to ___________. I am unable to obtain a national passport or any form of travel document from the Government of the country in which I now reside.” I left that part blank, sent in this form along with photos to the consulate in New York City on February 2nd and received my visa on February 12.

“Taiwanese (Republic of China) nationals or citizens holding Taiwanese passports, must contact the nearest Jamaican Consulate or consulate or consular post prior to making travel plans for Jamaica, for further information regarding current prohibitions against using their passports to enter Jamaica.” 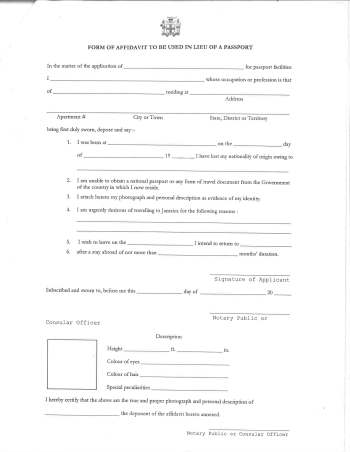 這個宣誓書要手寫、附照片還要拿去公證，還好男人有一位同事是公證人，沒收規費、不需要太多文件，就幫我公證這個表格。宣誓書除了姓名、地址、出生年月日、職稱、赴牙買加的理由和日期、身高、眼睛和頭髮顏色之外，要寫 “I have lost my nationality of origin owing to ___________. I am unable to obtain a national passport or any form of travel document from the Government of the country in which I now reside.” 我的這個欄位留白，2月2號寄給牙買加領事館，2月12收到我的護照和簽證。

My tourist visa was good within three months for one single entry. The visa was a tiny stamp on this sheet of paper. Ironically, this “I don’t have a passport” piece of paper was stapled to a page of my passport….

When we arrived Jamaica at the airport, the custom studied my passport and visa for quite a while. Then she left her desk for an office in the back before she stamped my entry stamp─probably to double check where she should have stamped. Of course, not having a passport, I could not collect a Jamaican entry stamp in my passport. It was stamped on the back of this sheet of paper… 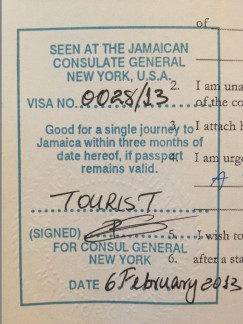 6 thoughts on “Jamaica: Please staple my affidavit in lieu of passport to my passport 牙買加簽證”