The second part of that day trip to Negril was to visit one of the most popular tourist spots in Negril ── Rick’s Cafe. Situated on naturally formed cliffs right by the ocean on the far west end of Jamaica, Rick’s Cafe offers a great view. Watching sunset here has become a must for tourists. This place is also known for cliff jumping. But we were not there yet. Before the famous sunset at Rick’s, our tour bus took us to several “shopping malls” for souvenir shopping as planned.

A roundabout in downtown Negril.

Shopping for more reasonably priced souvenirs sounded like a plus to me when we were browsing through several options of day trips offered by the travel agency. I thought it would be nice if we got to finish our souvenir shopping while we were outside of the resort. That way we did not have to limit our souvenir options to what were available at the gift shop of the resort.

Again my wishful thinking was proven wrong. The two “shopping malls” that the tour bus brought us to were in fact small compounds of a few boring shops selling bad quality souvenirs. Jamaica really needs a makeover of its souvenir industry.

The muggy weather and disastrous shopping schedule wore me down. But my complaints and dissatisfaction about this waste of my two hours were washed away when I saw this supermarket at our last stop of shopping. (My obsession about supermarkets and farmers’ market and my adventure of those in Zurich.) Walking around this supermarket made me really happy. Having found soursop juice made my day! (More about soursop and other Jamaican food.)

As the tour bus pulled in a parking lot across the street from Rick’s Cafe, I saw this jerk chicken stand at the entrance of the parking lot!!! Its owner waived at the bus, smiling, holding tongs. Street food is the best! Finally I got to try some real, street food style, cooked in a grill made of oil barrel style jerk chicken! It was the best I had during the trip! (My jerk chicken experience on the island.)

Rick’s Cafe was packed when we got there at about 4:30 p.m. We looked at their menu: $8 for wings, $16 for pasta, and $28 for steak. Seriously. And drinks? We could get as many as we wanted at the resort at a dollar a drink. So spoiled. This change of perspective impacted even Aaron’s decision. Not even Aaron wanted to spend money on overpriced drinks. We decided to just people watch and then ate after we got back to the hotel.

One of the outings offered by the travel agency included a boat trip. That tour was way more expensive that the one we chose. I probably would have picked that one though if I had known how nice it looked like to swim here. (And how horrible the souvenir shopping afternoon was.) It looked so relaxing and amazing to swim in this beautiful water with a life jacket. Those who would like to do cliff jumping put on life jackets and swam over to Rick’s Cafe to experience this number one touristy activity in Negril and then swam back to their boat. In between or while waiting, they just float on the water. That looked so tempting!

Here, cliff diving is just as famous as its sunset, if not more. There are a few jump points: the baby one of about 8 feet/2.5 meters, a middle one at about 27 feet/ 8 meters, and the top platform at about 35-40 feet/ 10-12 meters. Lots of kids and adults jump off from the lowest one. Some people challenged the middle or top platforms. 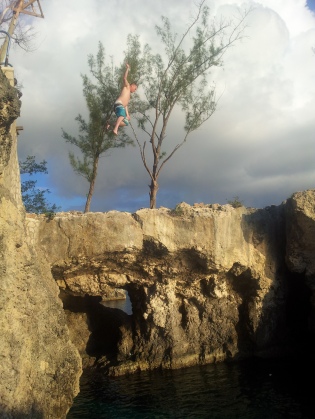 It seemed that if you know nothing about diving, you might want to think twice before you jump from the middle point and refrain from diving from the top platform. The impact of hitting the water with a wrong angle at that height looked horrific.

One girl took forever to try to work herself up into jumping. She walked up, and stood on the platform, staring down at the water with her hands covering her mouth, all in horror, appearing to be just about to cry. Then she chickened out and stepped back. A while later, she came back again, blocking the line, and pulled the same thing off all over again. After a few rounds, she actually jumped! The crowd cheered, and then gasped as soon as she hit the water. She dove in hard and hit the water mostly with her lower back! When she got out of the water, her back, arms and legs were all red and appeared to hurt really bad when touched. She was in pain.

The highest platform was built with wood and bamboo. It did not look steady or safe at all. Just climbing up alone looked very scary. Falling down in the middle of climbing would not be pretty because one would fall on the cliff instead of into the water.

Locals bring this cliff diving to a whole new level. Rick’s Cafe divers can climb all the way up to the platform and then on the trees around. The branches look way too thin to hold human body weight. Then they dive in the water with the fanciest jump: flips and turn and more flips and fly a little bit and enter the water with barely any splash.

Every time someone dives down from the middle or top platform, a bunch of locals approach them, yelling “yah mon,”waving, and trying to get them to go to this cave away from the steps coming back to the restaurant. If you know Jamaica or read about my chilling adventure on the Negril beach or my experience about greeted by locals at the hotel, you would know what the waving and the cave were all about. They were trying to sell people weed. Aaron and I were very curious, waiting to see if anyone went back to the hidden cave with the locals so that we could get a testimonial about what was behind the cliff. Most of the divers simply ignored the invite to the hidden cave. One person from our group actually followed the locals to the back and disappeared! To our disappointment, nothing too dramatic happened. He was offered weed and that was it.

Rick’s Cafe is situated on the very west end of Jamaica, so it offered a full view of the sunset sky, unblocked by anything. However, to me, sunset is the most beautiful when there is some sort of a foreground to go with it. At Rick’s Cafe, watching sunset is like a ritual. Hundreds of tourists slowly gather around, facing west. When the sun is sinking down and the sky turning orange, everyone and their uncle takes out their digital camera or cell phones to snap two gazillion pictures that have zero sense of composition. As soon as the sun disappear into the ocean, the majority of the crowd start moving, most of them walking fast toward the gate, because everyone was told by their tour guides that the bus was leaving at 6:30 p.m.