This Instagram caption said it well: “After today, I’m convinced that the Tidal Basin is actually a portal to an alternate universe where thousands of people come together at sunrise to shed their miserable morning demeanor.”  ─ @rayhayhurst

Amazing photos of cherry blossoms at dawn or sunrise motivated me to get up early. Getting up at 4:30 a.m. was really early for me, but it was worth it.

On April 9, a day before the peak bloom, I brought my camera to the Tidal Basin at dawn for the first time. Morning people were serious about their commute. For the red line trains to Glenmont, doors open on the left at Farragut North and on the right at the following stop, Metro Center. As the train approaching Farragut North and doors about to open on the left, about ten people left their seats and lined up at the door on the right hand side, just to make sure they could rush out of the door and beat everyone to the blue/orange platform and catch their transfer. I assumed they knew what they were doing, so I rushed for the lower platform. They were good. I hopped on a blue line train just in time. Thanks to these serious morning commute people, by the time I stepped out of the Smithsonian Station, it was only 5:38 a.m.

Prior to the peak bloom, shooting at dawn was a pleasant experience. I made it to the MLK Memorial at about 6 a.m. Not too many runners and photographers were there. Most of the tripod people were pleasant and greeted each other good morning. Navy Seals warmed up at the National Mall and did their morning run around the Tidal Basin. All the Seals ran behind tripods and nicely greeted morning photographers. Dozens of tripod spread out along the bank of the Tidal Basin. I was able to move from one spot to another the entire time.

Not many people showed up to shoot the sunrise at the Tidal Basin on April 9, a day before the peak bloom. 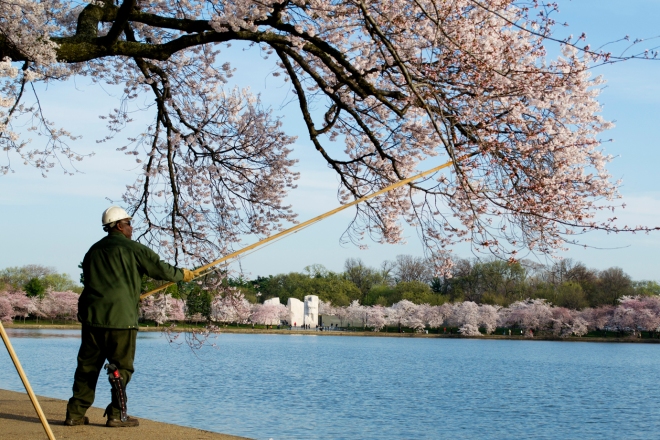 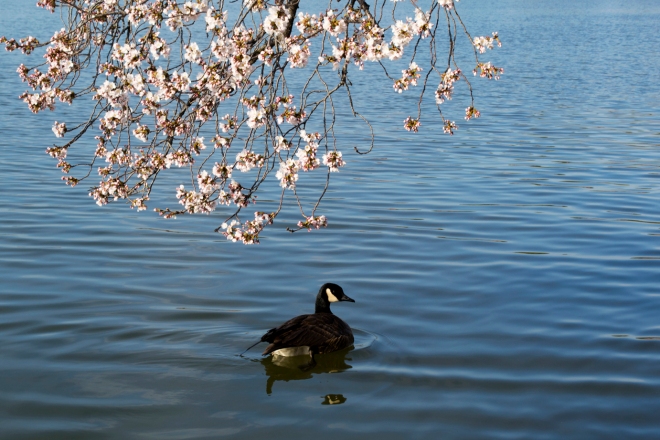 Another advantage about going early on in the cherry blossom season is that you might get a good shot of pretty birds with cherry blossoms as a background. I saw a blue jay in pale pink cherry blossoms! But of course I had the wrong lens on again and I was too far.

The blue jay was long gone by the time I swapped lenses and jumped across some bushes and a short wall.

After that, the Tidal Basin kept getting more crowded than the day before. I went to shoot at around the same time on the following day, April 10, the peak of 2014 as announced by the National Park Service. The Tidal Basin was quite busy in the morning, crowded with runners, visitors and photographers. But at this point, people were still very civil and pleasant. Tripod people maintained their professional etiquette, paying attention to their surrounding and scooping around so that they did not block someone else’s shot.

I made it to the MLK Memorial at around 6 a.m.  Many people already secured their shots but it was still easy enough to find a spot. (Sunrise at the time in early April was at about 6:38 a.m. The sun would be blocked by buildings until about 6:50 a.m.) 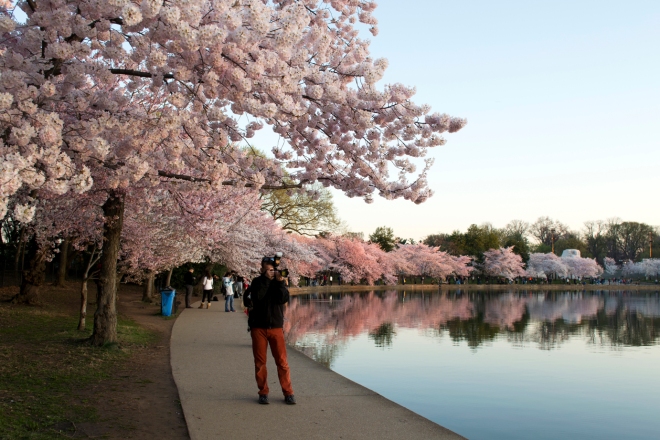 On the day of the peak bloom, the Tidal Basin was very busy early in the morning.

Some iced tea I had that afternoon delayed my bedtime. Watching the clock hitting one in the morning, I gave up and canceled my 4:30 alarm for my fourth day in DC. Instead of early morning, I went in the afternoon. One of my most favorite parts about this season is the cherry blossom pedal rain. White petals flying in the air with blue sky as a background make a beautiful scene. On the first two days of my early morning adventure, all I did was getting the safe, signature shots. So this afternoon I picked out some options for framing a different shot the next morning.

Then on Saturday, I thought I would get up early again since it was my last chance to shoot at dawn before I left DC. Without Metro, I’d have to leave before 4 a.m. to catch the bus and walk a long way. I decided to pay Uber in exchange of some extra sleep. I arrived the Tidal Basin just as early as the previous days. As I walked by the Japanese lantern, some guy with a huge camera bag and tripod passed me, running and panting. Um, shit, I thought, how bad was it going to be!?

All the spots I picked out the day before were taken. In fact all the good spots were taken. That included the area where you can see a curve/arch of the bank/cherry trees and where there are low hanging cherry blossom branches to frame a shot. Out of curiosity, I asked a guy on the ground right next to the fence in front of the MLK Memorial how early he got there to secure that spot. He said he was there 20 minutes ago.  I finally found a spot that was not ideal. Then this very nice guy said to me: Here. I’m leaving. Take my spot!

I gave up on fighting for a spot out there and settled with that spot.

This is the day when miserable morning demeanor peaked. Whether you are dealing with an iPhone runner, cheap point-and-shoot tourists, or expensive DSLR owners, half of them did not have any sort of the polite etiquette that on previous days every morning photographer─pro or not─ at the Tidal Basin possessed. These people did not give a damn about the fact that you had been up for three hours by now and standing or squatting at that spot for 50 minutes. People would stop right in front of your camera, pointing at the pretty low hanging branches that frame the Tidal Basin well and gasped in very high pitch: awwwwww this is beeautifullll! (Um, I know. That’s why I had to get here 50 minutes ago to secure this spot.) Then they sat right in front of you and asked their friend to take several pictures, not just one or two, because they wanted to change their poses and smile in different ways. And this series of touristy shots had to happen during the most colorful moments right before the sun was about to rise above the buildings on the horizon.

The touristy shots were fine. The Tidal Basin wasn’t my backyard and everyone deserved to take the pretty shots, right? But then there came the fancy DSLR guy that wanted to take a close-up of the very specific blossoms that were right in front of my camera. As the colorful moments slipping away while the gentleman could not nail his close-ups in the seemingly forever one minute and nine seconds that he had been blocking my shot, I lost my patience and decided to be a bitch and rescue the remaining very little time I had with the colors and light.

So really, if you want to shoot at dawn and you only want to do it once, don’t make it the weekend after the peak bloom. The crowd would not be a problem for a pro, but for people like me that need trial and error behind the viewfinder, an over the top busy Tidal Basin is just too frustrating.