It is impossible to not notice the publicity of this “encased sausage emporium” when you research must-eat’s in Chicago. Anthony Bourdain loved the foie gras sausage and duck fat fries in his show, No Reservations. Hot Doug’s is in his list of 13 places to eat before you die.

After the word got out that this sausage superstore will be closed for good in early October, the line became three times longer than before. Now, a typical wait is somewhere from four to seven hours on weekends. Seven hours! I would not even wait in line for two hours for the heavenly sounding hazelnut Valrhona chocolate cronut. As amazing as this gourmet sausage place sounds, no food is worth a seven-hour wait for me. We decided to try our luck on a weekday. 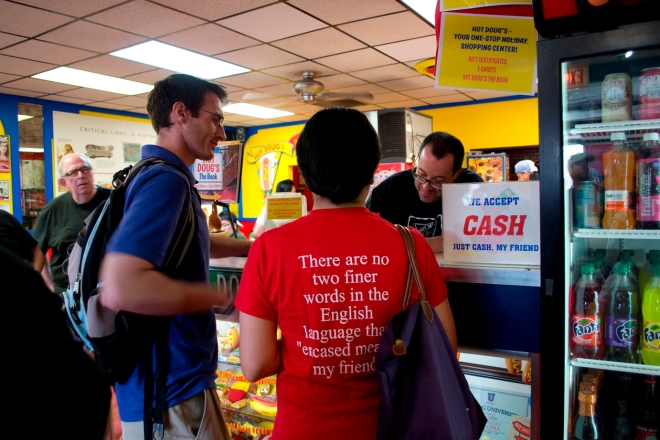 Hot Doug’s was opened in 2001. In May 2014, its owner and head chef Doug Sohn announced that he is closing down the shop on October 3 to take a permanent vacation. If you google Hot Doug’s, you’ll see that this means the end of the world for many fans.

On a beautiful Tuesday morning, we made Hot Doug’s our first stop of the day. My sister and I made it to this shop in Avondale at 9:35 ─ a bit later than what I planned to. The line was not too bad. 26 people were ahead of us. The line started moving slowly after the restaurant opened at 10:30 a.m. We placed our order at about 11:16 and got our food at about 11:21.

The two-hour wait was very much worth it! 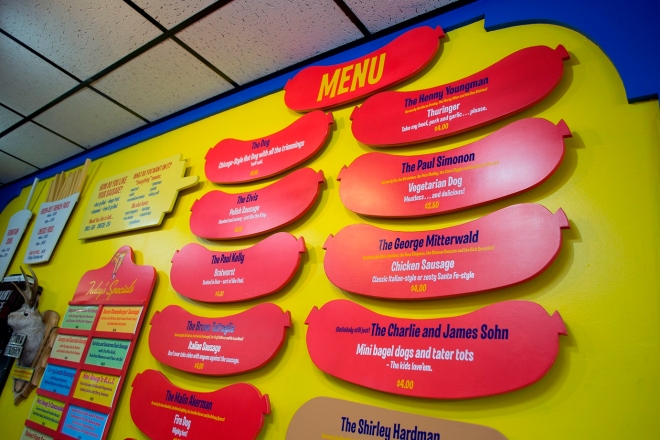 Doug Sohn personally takes orders at the counter. Warm greetings and patience with customers ─ he seemed to genuinely enjoy his job. This place serves about a dozen sausages in the Chicago style or other customized toppings in its standard menu and about another dozen of rotating specialty sausages. The awesome variety made me wish that I had a humongous appetite. We were torn among so many options.

The famous duck fat fries are available only on Fridays and Saturdays. Although I really wanted to try the duck fat fries, I did not have the time or patience for a seven-hour wait. 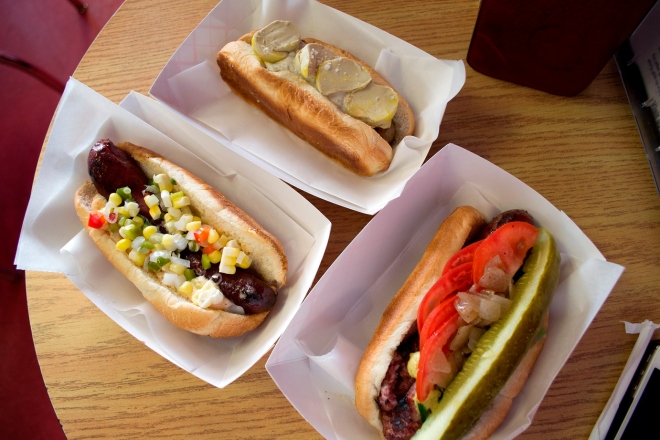 I looked around. Guys order two to four dogs. One dog each would probably be just fine for me and my sister. However, we waited for almost two hours, and this was the one and only chance we would ever get to try out this famous place. We had to order as much as we could possibly fit in our stomachs. But this is not to say that three dogs for two would be a suggested amount of food. I’ve seen pictures in a blog post of a couple sharing six dogs.

My sister and I shared three dogs: the Henny Youngman topped with the classic Chicago style, the foie gras dog, and the game of the week. The game of the week was a bison and wild rice sausage topped with corn relish. To me it was a very unique flavor profile for a dog on a bun, and everything worked together so well.

The Henny Youngman was a beef, pork and garlic sausage. My sister are I were both amazed at the first bite. The sausage has a smoke and grill taste to it.

The famous foie gras dog was a Sauternes duck sausage dressed with truffle aioli and foie gras mousse and sprinkled with fleur de sel. This creamy and rich combination was delicious! But when it was getting cold, it turned too gamey for me. It might be that I am not a big fan of truffle oil. The truffle oil mixed with foie gras mousses turned too strong for me when it gets cold. My sister liked this one the best from beginning to end.

This already incredible sausage shop gets plenty of extra points for the owner’s humor. On the previous day, we visited the Art Institute of Chicago. We wanted to get an iPhone case or something of Grand Wood’s painting “American Gothic” for my other sister as a souvenir. However, American Gothic was in Cincinnati for a Grant Wood exhibition and there was nothing American Gothic in the store! This is why I burst out laughing when I opened the door to the lady’s room in Hot Doug’s and saw this sausage parodied American Gothic! (Here’s the original that it’s mocking.) 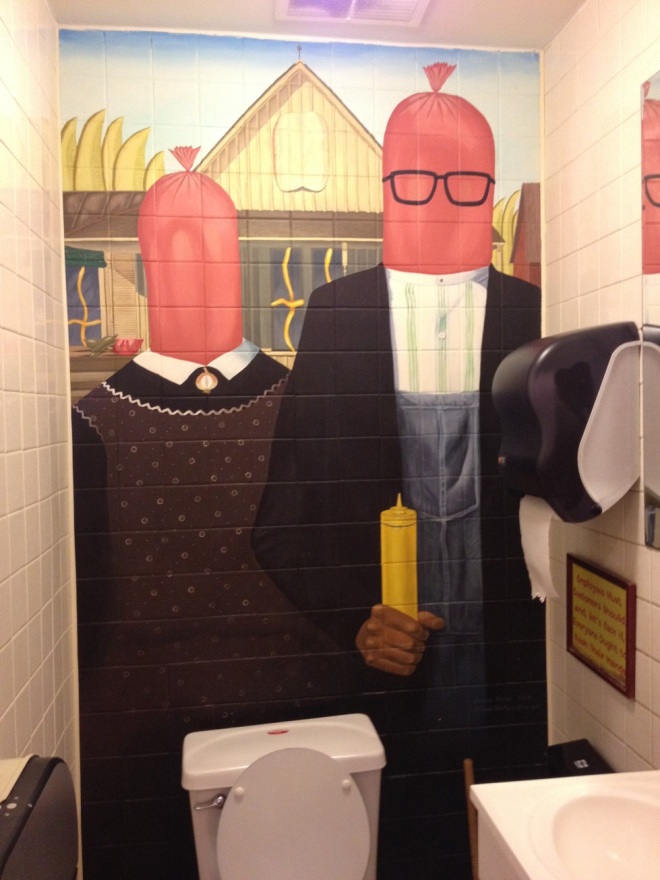 The owner pays homage to Rene Magritte in the men’s room. The men’s room featured a sausage parody of Magritte’s The Son of Man and “Ceci n’est pas une pipe.” It was hilarious to see these parodied paintings right after we visited the Magritte exhibition at the Art Institute of Chicago. These murals were painted by the owner’s friend, Louise Ahrendt. In his book, Doug Sohn wrote, “I will admit, it’s fun to be a patron of the arts; just call me the Lorenzo de Medici of Avondale.”

Avondale is not a neighborhood tourists would normally visit. The location is quite inconvenient. From our hostel in Lincoln Park to the restaurant, it takes about 40 minutes and two buses or 15 minutes by car.

We took advantage of Lyft free rides to get to Hot Doug’s and go back to downtown. My sister did not have a Uber or Lyft account. We registered an account for her in Chicago using my referral link and my credit card. And surprise! We got 10 free rides of up to $25!